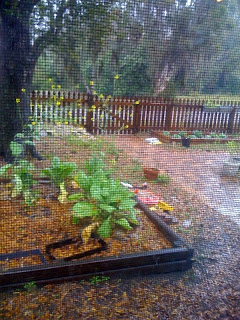 It’s been raining for two days straight, and I feel like I’m going to sink down into depression if it doesn’t stop. The weather has that effect on me. It’s a good thing I don’t live in the Northwest or in England, or some other place where it rains or looks overcast all the time. This drives the Florida girl crazy.

At least the cabbage plants (on the far right) enjoy the rain. They have been growing steadily and forming nice, firm heads without any effort from me whatsoever. The mustard (in the foreground) have finally bolted so maybe next week I can collect seeds.

Mr. B has an earache, and now he’s watching Race to Witch Mountain over and over. Ugh. There’s only so much I can take of Dwayne “The Rock” Johnson, explosions, and so on.

I’m also pacing and then leaping to the phone every time it rings, in hopes that it’s Clarion calling. Sigh. I said I wouldn’t freak out this year, but as time passes, I’ve become more agitated.