Thanks to Oso Meurte and Sir Brian, I am back on track. One flash story now entering revision stage.

Thanks, guys. Still looking for other flash site recommendations if folks have any.

Meanwhile, for a taste of what kind of short fiction I like, I suggest Shimmer (it’s not flash). A free issue is up for download (did I post this before?). One story in particular caught me, called “A Painter, A Sheep, and a Boa Constrictor,” by Nir Yaniv. He’s an interesting fella in his own right.

I turned and read this tale aloud to my hubbie as soon as I’d read it through. Very nice balance of bizarre, intriguing elements and the recognizable, as well as perfect pacing. I do so love a twist ending that really works well.

At this very moment, at least.

I have been writing, but not completing stories. I get stuck and move on to another story idea. Even knowing that flash submissions are required to be short doesn’t help; I take forever to get to the point.

Advice from my teacher-self says: Keep writing until the good part materializes, then chop. Only I’d say it nicer to my students.

What do you say? 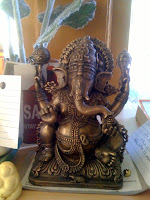 Now that I’ve cleansed the palate with a couple of silly posts… something completely different.

I’m collecting bookmarks for flash fiction websites, as I’ve recently learned of the idea and find it intriguing, at least as an exercise to tone writerly muscles.

Check out 365Tomorrows, Every Day Fiction and Vestal Review. Any other ideas?

I’ll be ready to submit soon! One particular tale jumped out of the percolator and is struggling toward completion.

Woo-hoo! Ideas are brewing in the noggin!

I am very pleased with the fact that in spite of my busy life, I am creating. Mostly outlined and jotting, but new story seeds are being collected. I am also researching markets and have found three that I plan to submit to in the next month or so.

The freelance writing is also going well; I have two new projects.

Hopefully, a more substantive post will emerge a little later. Gotta go to see to that progress.

Yesterday, before the bad news, I went into a used bookstore to drop off some posters for a local concert. I happened to be waiting in line at the counter just long enough for my eyes to drift over the rack containing film novelizations (which I generally look down upon, bleh). The very top and left book happened to be The Affair of the Necklace, written by Elizabeth Hand, a Clarion workshop leader. Was it a sign? Not a good one, as it turned out, but I did receive news just a short time later. However, it should not surprise me to see an author’s name, on a book, in a book store.

The day before that, I was in the bath, trying to relax and stop obssessing about acceptance/rejection, when the shampoo lather floating in the tub formed into the shapes of two fish. The smaller had a wide-open mouth poised to consume the larger. A sign? I don’t even know of what, but I was distressed and dashed it away.

As a child (and even then I was an aspiring writer), I used to think that writerly work was mythically channeled from some great source, that the ideas burned writers up from the inside until they were let out. The whole notion was that writing is always passionate and exciting, and that great writers were like half-mad artists. When I was a kid, I wanted to be that. Of course, now I’m actually writing, and although at least one story kinda burned its way out, the work I’m doing now has more to do with craft. The difference is that writing craft is taught and learned and shared (and requires time-consuming self-discipline); it’s not wild talent that madly creates in an isolated trance. Ideas come from everywhere, especially for speculative fiction, and random word association can springboard the writer into exciting new directions. All this has something to do with omens (random signs and symbols that are assigned meaning) that I’m not expressing very well here. Maybe you get the point.

Now that my summer has been freed up, I am hard at work on new writing, with the goal of two fresh subs before June in mind.

The current project, tentatively titled “In Like the Lion,” is a short story I started during the wait. It began with a phrase of simple word association, and at the time, I thought of it as very goofy, but at least diverting from the stress of waiting. Now, it seems to be taking on a life of its own, as stories tend to do, and the characters want to go places and see new people. And there it goes, with me in tow.

I’m also shopping around for good online writing workshops to join, if anyone has suggestions.

Finally, word from Clarion, and sadly it’s no. But also some encouraging words:

“The admissions panel feels that you (sic) work shows promise and says you came ‘very close’ to being admitted.”

I’ll keep working and try again next year. At least the process has motivated me to rethink my life a little and put me over the hurdle of first submission fears. In the meantime, I need to start subbing my work elsewhere.

And, my posts can go back to normal instead of just functioning as Clarion tweets.

A big thank you to everyone who sent me good wishes and support!

The long, drawn-out period of waiting for news about Clarion has finally driven me to accept Vylar Kaftan’s challenge: write a complete story before receiving acceptance/rejection. The point is to stave off anxiety by making it productive. I picked a random idea from the voice recorder app on my iPhone (good ideas come to me while I’m driving), wrote a hook and outlined ideas for conflict/rising action/development. I challenged myself further to write in third person, which I typically feel uncomfortable with. No conclusion yet, though. Is it normal to begin writing on a story before you know where it’s going? I follow that method most of the time. It keeps me from procrastinating too much.

So, now I have until Friday to finish it, maybe. Unless the Clarion folks miss their own deadline for notifying applicants. I fantasize concerning the reason they still haven’t notified me. I won’t go into details there. These thoughts make my stomach hurt.

I haven’t posted in several days, and I just don’t know where the time went. It got eaten by the zen-eating monster again, I guess. Lots of little side projects and articles, but no fiction. Gonna try to change that today, even though I’m under another deadline for an article.

At least it’s kept me busy enough to keep my mind off the lack of response from Clarion. Apparently, I am not the only one. Like Oso Muerte, I am in a holding pattern on that part of my life. It’s surprising how many opportunities have come up for that part of the summer, and how optimistic I can sound saying, “I may be at a writing workshop in San Diego then, I’ll have to let you know.” Maybe absurdly optimistic, I don’t know. I get this sensation in the pit of my stomach when I think about Clarion. Whether I get in or not, the process so far has been a touch emotional, which has really taken me off guard.

I have been thinking of how to say it for a few days now; I am SO anxious about my application to Clarion Writers’ Workshop. I think about it constantly. The pleasure and sense of accomplishment I felt the day after applying (March 1) has worn off, and now I daydream about it and search the internet for advice and journals from Clarion graduates. The picture is pretty much uniform and coherent: it was amazing and stressful. Some of the things folks say they learned (for example, how first person present narrative is SO newbie) stress me out because I’m still doing those things. But I get to thinking that maybe those newbie mistakes are okay. I gotta start somewhere.

After reading about the experiences of others at Clarion, I don’t know what I’m more afraid of: acceptance or rejection. Well, probably rejection. Of course, I want to go, for all the reasons that people state, like validation of my work, the experience of workshopping with other writers, producing work that has real potential, having the time to write and the motivation (at the same time) and so on.

However, I have anxieties about how I will handle the emotional part. I’ve done fiction workshops many times before, but the criticism there was not usually anything harsh. I want honest critique, but I don’t want to cry like a little baby in front of my peers. I don’t want to be sleep-deprived and snappy. I don’t want to come home feeling depressed when it ends. I don’t want to make friends and then mourn the loss of them when it’s over.

Last year, Vylar Kaftan over at the Clarion West Writing Workshop forum challenged applicants to write a story while waiting for notification. That way, you write without knowing the deadline. It could be tomorrow, so you have to work hard. I may try that.