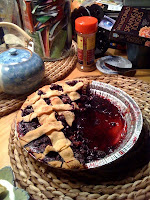 I promised a photo! Thankfully, I took one because, as they say, a picture will last longer. It was GOOD pie. I confess that I ate almost half of the pie all by myself. So much for the low-carb diet.

The delay in posting of the promised pie photo is the result of my family’s long-awaited trip to Anna Maria Island, which was incredibly beautiful. The sky was this gorgeous azure, and the water was perfectly clear and aquamarine. There was a moment when the beauty of the water was overwhelming and unreal to my eyes, a solid thing, like a delicately colored piece of plexiglass. Absurd, right? 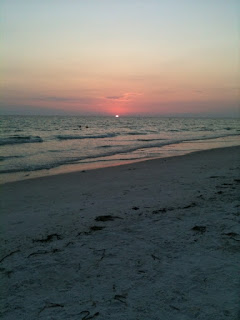 Unexpectedly, I shed tears when I first touched the water. The oil spill is on the mind of every person along the coast, even though they pretend, like our innkeeper did, that everything is wonderful as usual. I said some prayers, and we had a lovely time for the most part. Mr. B ran himself ragged and fell into bed at 9 PM every single night we were there. I wish I could figure out how to exhaust him that way at home.

The sea turtles were nesting at night, which was something I would have dearly loved to witness, but I was too tired. We did go out each night in the early evening and walk in the twilight. Every night, when the sun touched the horizon, an interesting thing happened. Every person on the beach stopped (except Mr. B, who never stops moving unless he is unconscious) and stared at the sun as it appeared to grow smaller and smaller, and then wink out below the horizon line. It occurred so rapidly, and I found this unceasingly amazing. I mean, Florida is flat, but I rarely see the completion of a sunset because we live in a tree city. I was caught up every night in that motion, startled by it each time. It made me feel very small. It’s easy to forget that we live on a enormous ball spinning in space, and then you glimpse it turning.

One thought on “And then there was Pie (and sand)”