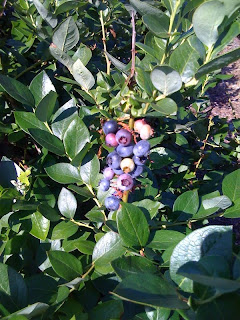 Mr. B had a lucky day, according to reports. I arranged for him and some of his homeschool buds to go to a local blueberry farm, where they loaded up the yummy little gems. I think it’s safe to say Mr. B put more berries in his mouth than in his bucket, but he had a blast.

It was blazing hot, of course, a balmy 90 degrees. When I finally sat down in the shade after an hour or so, I was startled that it took so long (about as long as it took for me to get overheated) for me to consider the contrast between my choice of recreation (blueberry picking) and the misery of farmworker labor (blueberry picking). A woman with four children in tow, one just an infant, was picking berries for the company, albeit in a different area, and I never saw her sit down for a break, especially not after such a short time. Just a thought. 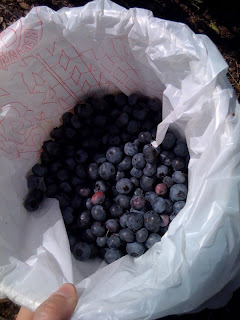 The berries are amazing, though, and it was satisfying to pick them myself. It doesn’t look like much, but there’s more than four pounds in there. I may attempt to bake some sort of pie with them on Friday. There could be pictures!

2 thoughts on “Today is a Blue-fingered Day”