I’ve haven’t been able to form a response yet to the disaster in the Gulf. It’s easier to ignore disaster when it is taking place in some distant place. This is not so far, really, and it’s coming closer every moment.

Today, the outer edges of the spill hit the Louisiana coast, in some of the most pristine wildlife areas in the country, as this aerial photo from the AP shows. 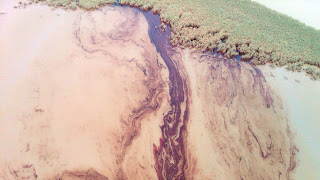 My family plans to go to Anna Maria Island in a few weeks, and I’ll pray there at the edge of the Gulf. I wasn’t sure what I would say until I read this over at T. Thorn Coyle’s blog.

As a pagan (not to mention a human with a pulse) who reveres the earth and the ocean, I feel horrified, numb and angry. However, I’ve been taught to channel feelings like these into positive ends, whenever possible. 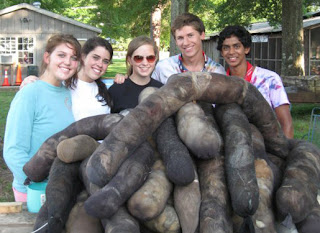 To keep from crying about it, I’m trying to DO something, which a feeble thing in the face of the trauma the earth is facing. There’s this effort you may have read about, where people are making these crazy-looking things called “hair booms” to soak up the oil. I’m just calling different salons and asking them to participate in the hair collection. One place so far said “yes,” the Fantastic Sam’s in my town. They have a designated collection bin for hair, so I took my Mr. B there to get his hair trimmed, and made sure he knows that his hair will go to help clean up the spill.

The crummy thing is, while salons all over the country are collecting the hair, BP hasn’t agreed to use them in the cleanup). These booms have been shown to work; why wouldn’t BP let the people help clean up this horrifying disaster?

Today, I channeled my inner crazy-lady and contacted the Louisiana Office of Homeland Security and Emergency Preparedness, where a woman named Jody was very nice but couldn’t tell me why the governor’s office isn’t pressuring BP to approve the use of the booms, in spite of the fact that there aren’t enough of the ineffective plastic ones. It seems strange and outrageous to me that BP has so much control over the cleanup. I called the local paper in Houma, Louisiana, which has recently covered the story about hair collection, and asked a reporter there to pursue it further. We had a effusive conversation, and she agreed to follow up and press the issue (there’s a BP response center in Houma).

Then I read that BP may be reconsidering, probably in a PR move.

Makes me want to holler, but maybe some good is coming.

EDIT: Later, when I tried to call the Coast Guard Gulf command office to confirm that BP is waiting for their approval (and to advocate for said approval), they just passed me off to BP Operational Command in Houston (read: nice PR ladies). They had no clue what I was talking about, even though it’s been in the news already that they’re considering the possibility.
image from www.matteroftrust.org, the organization behind the effort

7 thoughts on “Disaster and Heartache”