Sometimes a little shutter clicks in my mind, saving a memory under the filename “What Homeschooling Looks Like.” It would make a great photo essay, if I’d really been taking photos during these moments when I was busy just living: Mr. B watching PBS in his underwear, Mr. B snoring on the floor of a dewy tent in a campground, Mr. B crouched in the hallway completing a math assignment (his favorite spot for doing homework), or Mr. B squatting on the sidewalk examining a dead lizard through a jeweler’s loupe. 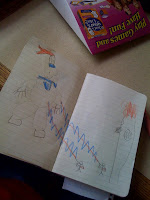 Mostly, I trick him into learning stuff while trying hard to listen to a bunch of jabber about his current fixation without going crazy. Lately, it’s Ghostbusters, which is hilarious on some level. He’s constantly talking about ghosts and making up wacky scenarios about hauntings, drawing pictures, playing the videogame, and watching the movie (although that’s tapered off now, thank goodness). He even solicited a special project from my mom, the woman who can make damn near anything out of cardboard, and she constructed a proton pack that fastens to his back with straps she made out of USB lanyards. He wears it everywhere. Can you spot the intrepid heroes on the left, saving NYC? 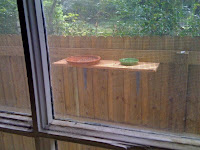 However, sometimes I do take photos, usually after the fact, to remind myself that the frustration and sacrifice are (mostly) worth the payoff. Today, we made a bird feeding platform from a shelf that I picked up on the side of the road and an old terra cotta flowerpot dish. We installed it outside his window so he can watch birds (one of his Aspie obsessions –could be worse). He can see it from his bunk bed. 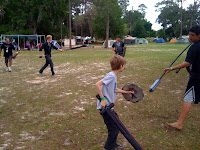 A couple of weeks ago, at Florida Pagan Gathering (happy Beltane, BTW), I took a deep breath and let Mr. B off the chain. He romped with his camp buddies and frequently disappeared from my sight, once for over an hour. I even let him participate in the so-called Celtic Games, where men and boys whack each other with boffers shaped like swords and toss big rocks. He took a beating and cheered and hollered himself hoarse, and it was probably the most fun he ever had.

Some days, it’s lots of fun being me.

2 thoughts on “Adventures in Parenting”