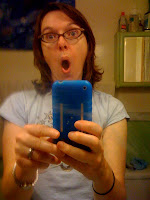 At least, the Clarion West “radio silence” is over. I can officially announce my acceptance, not that I’ve been as quiet as I should have been (it’s really difficult). Shout it from the rooftops! Except I still can’t talk above a whisper without strain. Argh! Oh, wait. I can’t even say “argh.”

When I applied last year to the Clarion West Writers Workshop, I took two “bathroom mirror” photos of myself, one with the Acceptance Face that can be seen here, and the Rejection Face, which I was too deflated to use in my 2009 rejection post. Don’t ask why. If you’ve played the Clarion waiting game, you probably know that it has serious side effects on your sanity. The photo’s a little myspace-ish, but what the heck.
The stupified expression I’m sporting in the photo is appropriate, as it turns out. When I got the call, my brain turned to mush and made me incoherent. I’d gone for a walk and left my phone at home, and there was a voicemail waiting from Seattle when I returned. I called back immediately without collecting my thoughts, which may not have helped matters anyway. Enter the gibbering idiot. I probably said “wow” and “thank you” about ten times each and failed to process much of what was being said on the other end, except the part about acceptance. Yikes! I’m glad to know I’m not alone in this instant moron reaction, as a few of my future classmates have expressed the same.
While waiting to share the news, I have to say that my overall response to this turn of events has not been quite what I expected. Instead of triumph and elation, I think the word for what I’m feeling comes somewhere between anticipation and terror. Kinda like I felt right before walking down the aisle at my wedding. Attending the workshop involves sacrifice, not just a financial one and not just on my part; plus, it’s an opportunity that, I think, comes with a certain kinda price tag, an obligation to live up to the faith being placed in me, both during and after. Most importantly after. I hope I can, more than anything.
Needless to say, I’m already planning what to pack.
EDIT: Oops. I didn’t apply to Clarion West in 2009. Rather, I applied to Clarion (San Diego), which is a whole different workshop. Maybe I am a little giddy after all.

16 thoughts on “In Which the SIlence is Lifted”