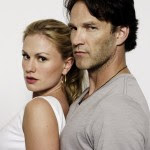 I’m over halfway through Dead Until Dark, and a part of me wishes I’d never picked it up. Morbid curiosity, I reckon. Lite reading, because I’m supposed to be concentrating on writing, but I still need something to read while I eat my oatmeal.

I’m not one for vamp books (trashier versions of romance novels, generally), but I do like some vamp television, especially Buffy. The True Blood adaptation of the Sookie Stackhouse series is my guilty pleasure, with an extra helping of guilt. I feel nervous about exposing my affection for it; will you think less of me? Hey, what I am going to watch, now that Dollhouse is over and done?
We at my house are not big TV watchers, but as a writer, I am obsessed with story anymore, and grab at it any place I can find it. Harris’s book is one of those rare examples of those proving not as good as the adaptation, unfortunately. It sort of tanks along and is written so lazily that I’m blowing through it. Very low reading level, but by far better in terms of characterization and setting than Twilight (ugh). I couldn’t choke down more than fifteen pages of that absolutely terrible book. Heroines need to have spunk, and vampires should bite people.
FIN