I rarely write about film, but I love the indie flick I watched last night (thank you, Netflix!) called Moon. It’s gotten rave reviews from some, and terrible ones from others. From a storytelling perspective, I thought it was a delight.

This film had classic sci-fi style that I haven’t seen since 2010. The film definitely has a flaw or two, but you gotta love Kevin Spacey as the voice of a robot, and the slow, slightly creepy style the film evokes.
The star, Sam Rockwell, gives it an “unknown” flavor, but he’s had a number of wildly different roles over the years (notably, Zaphod Beeblebrox in the recent big-screen Hitchhiker’s adaptation). He’s slated as Justin Hammer in the upcoming sequel to Iron Man, and he was in Gentlemen Broncos, which is on my to-be-watched list.
Sam (name of the character as well as the actor) is the sole operator of a cold fusion mining operation on the moon, serving out a three-year contract. It gets lonely and cabin-feverish up there, with only a emoticon-faced robot to talk to, and Sam starts to go a little wonky.
Moon serves up some twists and turns, as well as a little humor, so avoid spoilers like IMDb if you want the full effect. My husband and I had to force ourselves to stop speculating aloud every few minutes concerning the outcome, even though it’s loaded with foreshadowed story elements. Rated R, but only for the repeated use of the F-word.
Mr. B strolled in and out of the room while we were watching and was apparently bored by the lack of action. But not all science fiction is about action when there’s a good story. 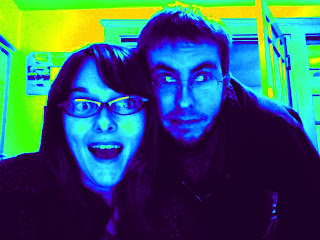 Hooray! My new Mac is here. After a mildly amusing prank, in which my hubbie’s co-workers carefully opened the package containing the laptop and successfully replaced it with a frosted, sprinkled donut, the MacBook Pro made its way home to our messy home office.

I won’t slobber on about it too much, but it’s awesome. The keys have a lovely, velvety feel compared to the clunk-clunk of the old one, and it’s quick. The first thing we did with it (’cause stuff like that has significance in our house) was take some pictures. Then we watched Lady Gaga videos. Silly, but SWEET.

I’m so psyched to discover that NPR has an iPhone app!

A youngish person with serious chops.

Maybe this is completely insane or just borderline gender confusion, but I’ve had several opportunities to wear glue-on mustaches in my lifetime, and I enjoyed those experiences a bit too much (folks from the Lunch Bunch will know what I mean by that). Being a fan of both silly mustaches and tattoos, how could I miss a whole subcultural niche concerning cute mustache tattooing?

There’s even social networking for these folks at http://fingerstache.ning.com

Oh, stop worrying. I’m not going to do it. It’s very silly.

This is so cool, I had to repost.

From E.J.’s blog over yonder:

Check it out, especially those folks I know are Rossellini fans.